Find our current Cardiothoracic events and news stories below. 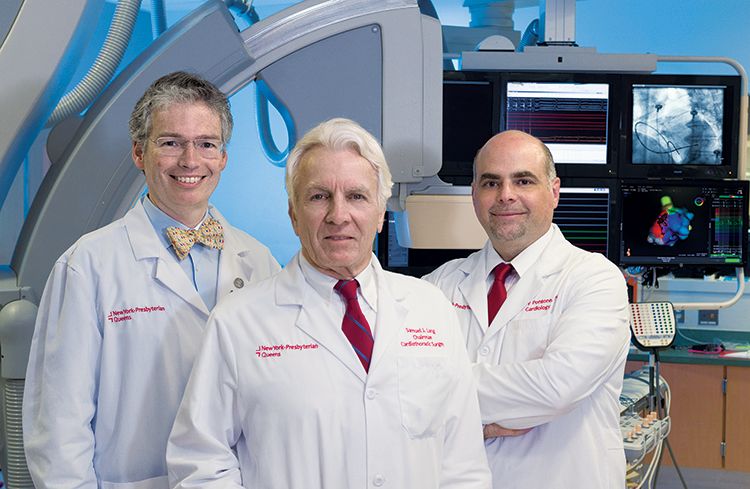 In the article, he is quoted “The exciting things about the technology are, one, that we are able to treat a wider range of patients than we otherwise would have with just open-heart surgery. We have more options for our patients. Also, it’s less invasive physiologically than open-heart surgery. Because of that, recovery is quick. You see patients rebound and go home. They’re doing what they wanted to be doing two weeks ago. They’re doing it now without a problem. It’s very gratifying.”

Here is a link to the article:  https://healthmatters.nyp.org/walk-woods-noma-bar/

CBS2’s Dr. Max Gomez shares the story of a woman who had her entire aorta replaced with a polyester version to save her life

Patients with Lung Cancer Have Risk of Cancer-Associated Suicide

Continuing coverage of Drs. Jeffrey L. Port and Mohamed Rahouma’s study, presented at the American Thoracic Society's 2017 international conference, which found that people with lung cancer have a strikingly higher-than-normal risk of suicide.

Appointed to the National Marfan Foundation Professional Advisory Board - December 2016

Dr. T. Sloane Guy appears on FOX 5 to discuss the benefits of using robotics for heart surgery and highlights a patient who had a successful outcome. Dr. Guy does about 100 robotic heart surgeries a year and his goal is to more than double that number. He said the problem is that not enough patients know that this type of surgery exists and next spring he will be organizing a training for doctors across the country.
Dr. T. Sloane Guy, associate professor of clinical cardiothoracic surgery

Many patients with non-small cell lung cancer (NSCLC) have no identifiable mutations, and therefore their disease cannot be managed with targeted treatments. These patients often experience disease progression despite chemotherapy. However, a study led by investigators at Weill Cornell Medical Medicine used a new approach to examine crosstalk between cancer cells and cells in the microenvironment in NSCLC. Instead of looking at the tumor as a whole, the researchers used deep sequencing of RNA to analyze individual cell populations isolated from NSCLC specimens, an approach that could someday lead to new treatments for patients with NSCLC.

Weill Cornell Medicine is sponsoring a Health Lecture Series at the 92Y this October 27, 2016

The past decade has produced tremendous advances in the use of robotics across clinical areas, vastly expanding the horizons of disease management. Weill Cornell Medicine is sponsoring a Health Lecture Series at the 92Y this October 27, 2016. Leading surgeons Dr. Jeffrey Port and Dr. Sloane Guy are joining a panel of experts discussing the future of robotic innovations.

The Department of Cardiothoracic Surgery at Weill Cornell Medicine|NewYork-Presbyterian is pleased to announce a new, ACGME-approved, Thoracic Surgery Residency position "tracked" towards General Thoracic Surgery. This two-year residency program will be effective for start date of July 1, 2013. The program covers all aspects of general thoracic surgery, both benign and malignant, with an emphasis on minimally invasive procedures such a VATS lobectomy/segmentectomy, minimally invasive esophagectomy, and laparascopic foregut surgery. Advanced endoscopic and bronchoscopic techniques such as endomucousal resection, airway stenting, radiofrequency ablation, and navigational bronchoscopy will also be covered. The 2 years will consist of approximately 12 months of General Thoracic rotations and 12 months of Cardiac Surgery rotations, preparing the trainee to sit for the American Board of Thoracic Surgery examination via the General Thoracic Pathway.

Applicants should apply promptly, no later than April 6, 2012. Those interested in starting July 2013 will apply via ERAS and the NRMP in Standard fashion. Please contact Jeannette Torres jtorres@med.cornell.edu or Richard Appell at ria2005@med.cornell.edu for application details. Program questions can be addressed to Nasser K. Altorki, MD, Professor and Chief Division of Thoracic Surgery, nkaltork@med.cornell.edu.