Many patients with non-small cell lung cancer (NSCLC) have no identifiable mutations, and therefore their disease cannot be managed with targeted treatments. These patients often experience disease progression despite chemotherapy. However, a study led by investigators at Weill Cornell Medical College used a new approach to examine crosstalk between cancer cells and cells in the microenvironment in NSCLC. Instead of looking at the tumor as a whole, the researchers used deep sequencing of RNA to analyze individual cell populations isolated from NSCLC specimens, an approach that could someday lead to new treatments for patients with NSCLC. 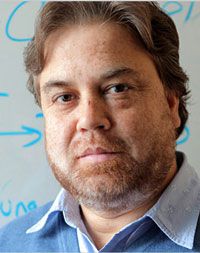 To analyze the enormous amount of data generated through the RNA sequencing step, the research team had to develop a new computational modeling program. They found no existing program was capable of revealing all the pathways that multicellular-stromal components and tumor epithelial cells use to communicate. The program they developed, called Cell Cell Communication (CCC) Explorer, decodes gene arrangements in these cellular networks. To test the reliability of CCCExplorer at predicting crosstalk pathways in macrophages, monocytes, neutrophils, tumor cells and epithelial cells, the investigators manipulated some of the identified pathways in animal models of lung cancer and human lung cancer tissue. Their results confirmed the CCCExplorer predictions and indicated that the program may be useful in identifying new targets for treatment in the tumor microenvironment. The team recently published their findings in Cell Reports, and Targeted Oncology had an opportunity to interview Vivek Mittal, Ph.D., associate professor of cell and development biology at Weill Cornell Medical College, New York, about these findings.

Targeted Oncology (TO): What is new about your findings regarding how the tumor communicates with its microenvironment?

Mittal: The tumor microenvironment is an emerging field in oncology and is currently being intensely investigated. The tumor microenvironment is heterogeneous, composed of different cell populations. These are groups of normal cells in our body that participate in normal physiological functions and are somehow reprogrammed by the cancer cells to promote tumor growth.

Nobody has worked before to understand reprogramming of the microenvironment at a global level. To understand how all the different cells are reprogrammed by one tumor, we decided we needed to fractionate the tumor into specific individual cellular populations and examine each one on a molecular level. If you study the tumor as a whole, you will not be able to see how the tumor affects all the different cell populations in the microenvironment. It is like your neighborhood- you have to understand each sector of the community first before you can determine how the whole neighborhood functions.

TO: How does the microenvironment contribute to tumor growth or disease spread?

Mittal: The tumor activates the cell populations in the microenvironment so that they secrete tumor-promoting growth and signaling factors. Each of these factors acts as a key and binds to their specific receptors (the lock) on the tumor cells. This activates molecular pathways inside the tumor cells, which make the tumor cells divide and grow rapidly.

To give you an example, everyone is familiar with the recent success of immunotherapy and how the immune cells fight disease activity. In the tumor microenvironment, the cancer cells engage the brakes on the immune cells to make the immune cells dysfunctional. Since we now know the molecular nature of these brakes, therapies have been developed to disengage them. Thus, we can target them with drugs and take the blocks off the brakes, allowing a stronger immune response.

We are trying to figure out how the tumor blocks or activates these cell populations through crosstalk that occurs between the tumor cells and the cells in the microenvironment. This crosstalk is very important. So far we have known bits and pieces of it, but we need to understand it at the global level, in the whole tumor. It is like being aware of only a few conversations in a cocktail party; knowing all the conversations that took place at the cocktail party would give you a better understanding of what transpired.

TO: Could you explain more about how you achieved your findings and what CCCExplorer is?

Mittal: Our idea was that you have to split the tumor into different cell communities and then perform genomic analysis on each community. Once we had all the genomic data for all the cell populations, we said, "What can we do with these data to understand the nature of the tumor? How can we mine them to determine how the cells talk to each other?"

Since this was the first time taking this approach, we had no way to analyze this multicellular genomic data. We collaborated with a group of computational biologists from the Methodist Hospital in Houston, Texas, and spent 8 or 9 months engaging in our own crosstalk- between experimental biologists and computational biologists- to develop a model that allows you to identify the different cell communities and how they interact with the tumor. That is what CCCExplorer does.

TO: Do your findings have any implications for the growing reliance on targeted molecular therapies to treat cancer?

These are normal cells, and you do not target normal cells. But the tumor has hijacked or hypnotized them, so they are in an abnormal activated state. Abnormal stromal cells in the tumor microenvironment, for example, have different gene expression patterns than normal stromal cells. We want to target the cells in their activated state; and, more importantly, we want to target the crosstalk pathways they use to engage with the tumor cells. Drugs that target these activated cells could work alone or with standard care therapy.

Many cancers do not have a known driver mutation, or if they do there are no drugs to target them, and chemotherapy is the only treatment. Molecular analysis of the microenvironment like we did can identify new molecular targets for treatment.

Mittal: We have not done this kind of detailed molecular analysis in breast cancer, but we know many of the same cells are involved. However, while we expect to find some common mechanisms, there is a strong likelihood that some populations will be different and some mechanisms will be different for each cancer.

TO: Do genetic mutations have any role in determining the make-up of these cell populations in the tumor environment?

TO: What are your next steps?

Mittal: We have only validated a few of the molecular targets we identified. Our goal is to experimentally validate many of the computationally predicted crosstalk pathways. Importantly, we have also performed similar analyses in human lung cancer. The idea is to compare the crosstalk findings from human and mouse studies to identify common pathways and to perturb these pathways genetically or with drugs in the mouse model of lung cancer to determine their tumor-promoting function. Our preliminary analysis looks promising and suggests that the pathways we are identifying might be candidates for therapy development.

TO: What would the take-home message be?

Mittal: The tumor microenvironment field is moving in one direction right now, but there is a lot more to do. As tumor status changes, how do tumor-specific driver genes influence these pathways? When the tumor is exposed to chemotherapy, what changes in the microenvironment pathway can we target to destroy the tumor?

Imagine the electric grid in New York City, with wires running from one place to another. If you block the signal in one wire, lights go off in one part of the city. Our goal is to find key nodes, so that their interruption can lead to shutting down lights in the whole city. We need to find the most important circuits in the tumor's "grid" that will allow us to shut down the tumor completely.